Our product Bio-Cyst in Urology segment has been specially developed
to provide immediate relief to Cystitis patients. 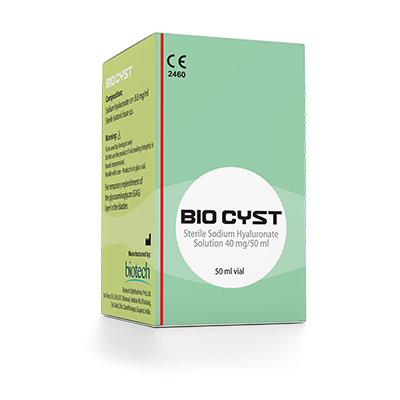 For Temporary GAG Replenishment in the bladder

What is Cystitis and how does Biocyst help in relieving pain 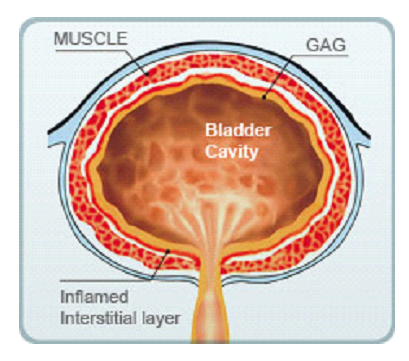 Cystitis is a glycosaminoglycan (GAG) layer deficiency in the wall of the bladder. Once the mucous wall of the bladder is compromised by this deficiency; it becomes susceptible to irritation and inflammation. The damage can be caused by toxins in the urine, bacteria, radiation, infection and other factors yet to be identified. Cystitis can lead to bladder pain and bleeding as well as the need to urinate so frequently that a normal life is impossible.

Sodium Hyaluronate is the structural backbone of the extracellular protective layer. It temporarily replaces the GAG layer. It can help to rebuild the bladder wall structure by:

By temporarily replacing the GAG layer in patient’s bladder, Biocyst helps to relieve pain and the urgent need to urinate that is common symptom among patients with cystitis. Biocyst also shows preventive effect in bacterial cystitis and radiation induced cystitis.

Method of use of Biocyst

Instill the entire volume of BIOCYST into the bladder after residual urine has been removed.

BIOCYST must be held in the bladder for minimum 20 to 30 minutes.

The GAG layer of the bladder is deficient in cystitis. This deficiency contributes to the clinical symptoms in diseases such as interstitial cystitis and cystitis caused by infections, trauma, urolithiasis, urinary retention and neoplasia.

To improve cystitis associated with these conditions, it is recommended that BIOCYST be instilled into the bladder each week for four to twelve treatments and then monthly until symptoms resolve. The attending urologist should direct any prophylactic use of BIOCYST.

This website uses cookies to improve your experience while you navigate through the website. Out of these, the cookies that are categorized as necessary are stored on your browser as they are essential for the working of basic functionalities of the website. We also use third-party cookies that help us analyze and understand how you use this website. These cookies will be stored in your browser only with your consent. You also have the option to opt-out of these cookies. But opting out of some of these cookies may affect your browsing experience.
Necessary Always Enabled
Necessary cookies are absolutely essential for the website to function properly. These cookies ensure basic functionalities and security features of the website, anonymously.
Functional
Functional cookies help to perform certain functionalities like sharing the content of the website on social media platforms, collect feedbacks, and other third-party features.
Performance
Performance cookies are used to understand and analyze the key performance indexes of the website which helps in delivering a better user experience for the visitors.
Analytics
Analytical cookies are used to understand how visitors interact with the website. These cookies help provide information on metrics the number of visitors, bounce rate, traffic source, etc.
Advertisement
Advertisement cookies are used to provide visitors with relevant ads and marketing campaigns. These cookies track visitors across websites and collect information to provide customized ads.
Others
Other uncategorized cookies are those that are being analyzed and have not been classified into a category as yet.
SAVE & ACCEPT